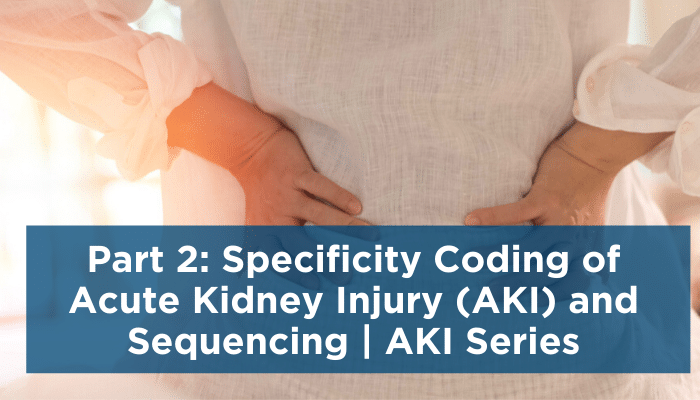 As discussed in Part 1 of this series, AKI/ARF is a common diagnosis that coders see daily. In Part 2, we are going to focus on the different types/specificity of AKI/ARF. We’ll learn what they mean, as well as how to code the diagnosis.

There are several different codes that can be used to report the diagnosis of acute kidney injury and/or acute renal failure. This is one example of why diagnoses should not be coded by the use of only the Alphabetic Index within ICD-10-CM. It is imperative that coders also use the tabular before final determination of the code is made. If the coder only looks in the Alphabetic Index under injury | kidney | acute, the index goes to N17.9 (acute renal kidney failure, unspecified). If the type or cause of the AKI/ARF is further specified then N17.9 would not be appropriate. However, if the coder begins the search with the term “failure” there will be several selections for further specificity under failure | renal | acute.

When coding AKI/ARF, there are instructional notes within the ICD-10-CM Index for coders to follow as well as Exclude1 and Excludes2 notes. When a cause for the AKI/ARF has been identified the underlying condition/cause should be reported also. Traumatic kidney injuries are reported with codes from S37.0-.

There are many different scenarios that would dictate the sequencing of AKI/ARF. The definition of PDX should always be used when determining the PDX. Remember that just because the condition may be present on admission does not necessarily mean that it is appropriate as PDX. Chapter specific guideline must be followed as well as other coding guidance that your record may require. Some of the most common specific guidelines that come to mind are sepsis, OB/delivery records and transplant complications. Let’s look at an example of each of these:

Note: The old sequencing guidance from ICD-9-CM regarding AKI/ARF and dehydration has been clarified in 2019. The sequencing is based on the circumstances of admission and will be a case by case decision. There is no rule that states that the AKI/ARF must be sequenced first over dehydration.